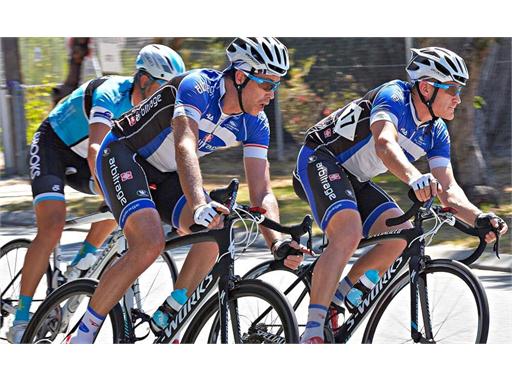 The Masters Team enjoyed a successful summer season of criterium racing and a smattering of open grade racing. The team finished a credible 4th in the teams classification for the season which was an improvement on the previous season, no doubt bolstered by the addition of Luke Pledger into the masters ranks on the 1st Jan.

As its turned out, the addition of Luke has seen the number of successes for the team increase significantly, with a number of wins at both masters and open races, some of the latter being against some of the States finest “young guns”.  Luke with fellow masters rider Ian Gregory took the top step of the podium in their respective age groups at the State Age Criterium Championships at the West Coast Masters, and Adam Feilding took a strong third and Scott Sanders fourth in a show of team domination at that event. Luke quickly backed up this success with a win in the State Open Criterium Championships in the Masters Category followed by a win in the Tom Lowry Criterium. Luke was also dominant at the Cyclassic weekend in the Goldfields, where he took out the handicap race and was the fastest male over the two days of racing, a very impressive start to the year. Luke has become a rider a to be watched in the Pickering Brook Series, having taken out the first race convincingly.

The team also pulled off some impressive wins within the Velofest week, with the other star rider, Matt Upton taking an impressive win at the UWCT road race and taking the UWCT winners jersey in the process. Matt has also been a force to be reckoned with in the masters racing scene, and is always in the mix for the win or a place!

Peppered amongst these wins were a number of other wins and podiums within the criterium season for the team. The team continues to race very well as a team with many sacrifices laid at the alter of the race gods to achieve the success of the team! The rest of the Masters Team have remained active in the local racing scene, and remain true to their ethos of simply enjoying the racing, and having some fun, whilst at the same time trying to be competitive and supporting our many loyal and generous sponsors.

The road racing season has started and whilst we are yet to pull off a win yet, its still early in the season and once the team is back to full force, that first win wont be to far off!